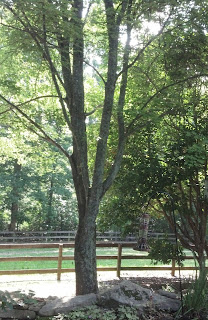 Outside my French doors the noon of summer shimmers in the air. Animals lull in the shade of century old oaks. Sweat darkens the horses sides. Moisture from last night's rain is no more than a heavy memory.
I cast my gaze upward, where I will be soon seated in a 21st century jet headed to Chicago. It makes me thinkof frying eggs on a sidewalk while people hurry from one air conditioned building to another. High energy sparks from women's heels, and heat wets the back of shirt and tie men. My heartbeat rises, then settles as a slight breeze tickles the honeysuckle. I listen to the silence that surrounds me. My daughter will surround me with love while I am in the city. It will be fun, and in five days, I will come back to the Foothills of North Carolina. I breathe deep, absorbing home before I leave.
Have a nice weekend, all, wherever you may be. 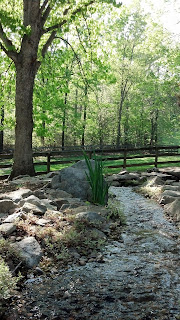 Posted by Misty Hill at 10:12 AM No comments: Links to this post

This is my hunt in the video. Green Creek Hounds.
Posted by Misty Hill at 8:06 AM No comments: Links to this post


Kash and I had a nice ride today. He remained steady on the slippery ground and tolerated a furious attack of horseflies. We also had our first test of horse trusting rider. A small creek crossing had Kash at a standstill, feet planted, eyes large with fear of the mysterious bottom. I do not ride with spurs on Kash, as he is young and I want his training to be one of memories of team work not pain. I asked him to go forward over the water. He gave me one of his big eyes looks as if he was saying, "You've got to be kidding."

I kicked. He stood. It was time to muster my courage and be the boss. If I were to be the rider he needs, I could not retreat. I kicked his sides, again. He stood. This was make it or break it (me, when he realized he could refuse my bidding and explode) time. I could not fail him and I prayed our months of working on trust would mean he would not fail me.

I used my best "do what I say" voice and ordered him to move forward. HE DID!

Over the creek and onward to being a full partner in the world of horse and human he went. He moved with great energy after the crossing, exhaling all his pent-up anxiety, as did I.

We moved a stride closer to being better in both our lives today. I am so very proud of this young horse for overcoming many things and learning to be all he can be.
Hope you had a good day, too, all. 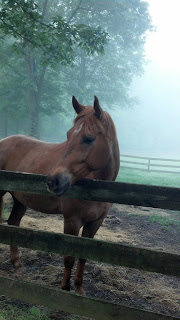 Posted by Misty Hill at 3:21 PM No comments: Links to this post

From lime to deep forest, the greens have taken over the landscape outside my French doors. It's almost Ireland, except Ireland has fewer trees. Squirrels bounce from limb to limb scattering leftover raindrops from yesterday. The horses are munching on breakfast and the dogs are restless to play. My gaze wanders over our land and I soak up the happiness if gives me. They say green is good for you, don't they? Light pierces the deep foliage and kisses my cheek. I listen to my husband's footsteps moving toward me. It's going to be a bright, bright sunshiny day. Enjoy. 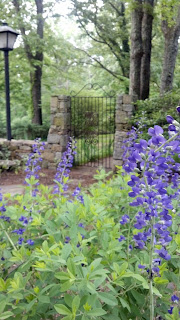 Posted by Misty Hill at 5:32 AM No comments: Links to this post

The morning looks different when viewed from the mountain. More sky, less ground, a sensation of floating above the day to come, and fresh air invigorated. That is how I felt when I awoke for the first time at Donothin this AM.Then, we came down to earth at the Waffle House where we learned they will be closed for two weeks for remodeling. Boo. But, making the best of things, we put in a request for bigger booths.
Next on the list was the farm. We were greeted by the animals that make us feel special and the chores that go with them. Dogs dashed to us, horses galloped to the barn and the cat vocalized her non-need of humans, but a loud demand for breakfast.
Mid-day I met a friend for a great trail ride. Half way through, horse on idle in the creek, I watched the current and let my thoughts stream through the joy I call my life.
A mountain and the foothills kind of day gave the term 'highs and lows' in my world a new meaning. I smile and say a silent Thank You as I wait to go meet friends at the Brick for pizza. Have a wonderful evening all.
Posted by Misty Hill at 3:44 PM No comments: Links to this post

Deborah K Bundy Writing From Misty Hill, Poems, Stories: I Will See You Again, thanks to Carrie Underwood for the Inspiration

Deborah K Bundy Writing From Misty Hill, Poems, Stories: I Will See You Again, thanks to Carrie Underwood for the Inspiration
Posted by Misty Hill at 10:39 AM No comments: Links to this post 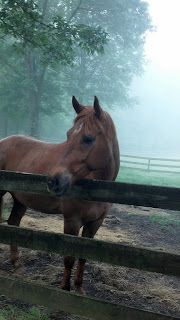 Today, Kash and I joined my friend Janet Cummings﻿ and her horse on a trail ride. I was a bit nervous. Kash hasn't had many outings. Our first challenge came not long into our ride. Recent rains let mud behind. There in front of us was a huge orange mud Monster waiting to eat us alive. Or at least that's what Kash and Janet's horse, Deacon believed.
Janet and I looked at each other. I said, "This may be the shortest trail ride ever." Janet agreed. We both knew there was worse to come. After a few firm body language discussions, Kash and Deacon decided to take our advice. They minced through the mud. We gave them lots of praise.
Then, we came upon a small lake in the trail. Or at least that's what the horses thought. Kash looked back over his shoulder at me, as he likes to do, and said with those big brown eyes, "You want me to go in there?"
I straightened his head and gave him a nudge. He didn't budge. It appeared I could understand horse speak better than he understood rider signals. Eventually, the two horses, practically clinging to the trees on the edge of the trail, made their way past the puddle. I believe they decided, we'll go, but you'll get a few scratches for making us do it.
The day became one of lessons on walking through, around, and past water in all its forms, from small streams, to large puddles and mud monsters.
Near the end, Kash sashayed through deep mud with nary a glance, then peered back at me with a "did you see that" smirk.
Me, I gave him my best rider signal, a big, old hug. "You're such a Mudder," I said.

Posted by Misty Hill at 10:37 AM No comments: Links to this post

I Will See You Again, thanks to Carrie Underwood for the Inspiration 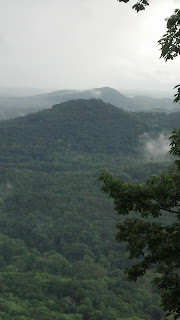 Outside my French doors this morning there was nothing but rain, so this afternoon we went up to Warrior Mountain. Mist coated weather passing, sun caressed the moment. It made me think of Carrie Underwood's performance last night on the CMT awards. Her heart was obviously with those still mired in the tragedies of the tornado, yet, she was able to express a firm belief in a better tomorrow. See you all then. May the vision, the moments of your tomorrows be filled with joy. Sweet dreams.
Posted by Misty Hill at 6:01 PM No comments: Links to this post "Orange alert. Toad in the barn." Our tiny terrier, Mini Cooper signals by upturning brush boxes, dashing in and out of stalls and giving me that, "Why aren't you helping?" look. Sure enough, as I enter Kash's stall out hops a toad the color of red clay. Cooper rushes over, gives him a nudge. He makes a concerted effort to spring away, but this guy is fat. He's not going to win any high jump records. Cooper does the cold nose to hinny thing, again. The toad moves, maybe two inches. I finish my chores, grain delivered, water filled, horses brought in, then check on progress. Majestic Orange, as I've now named him has covered about three feet of concrete. Mini Cooper has lost interest and gone in search of lizards. She loves lizards, to chase and in taste.
The toad croaks.
I say, "If you don't get in shape, you will soon."
Lesson learned. Perhaps, I'll go to the gym today.

Posted by Misty Hill at 6:28 AM No comments: Links to this post 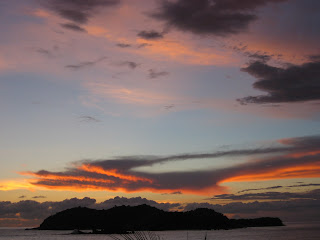 Outside my French doors, dark holds the mysteries of today. Small creatures rustle across the landscape. I follow their movements by the far and near snap of twigs, trills and saw sounds they make. This is their time and I am not a part of it. I could venture out, slide into their world, but they would grow silent at the intrusion. My presence would disrupt this harmony of morning before the light comes.
Do I envy these creatures whose activities I am not apart of? Not really. I find there is pleasure in sitting quiet and listening.
The sounds fade, and the small creatures grow quiet as black fades to blue. I take this lesson from the dark into the light and know it will add joy to my day.

Posted by Misty Hill at 2:57 AM No comments: Links to this post 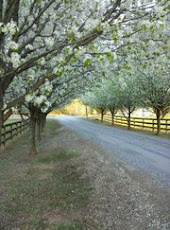